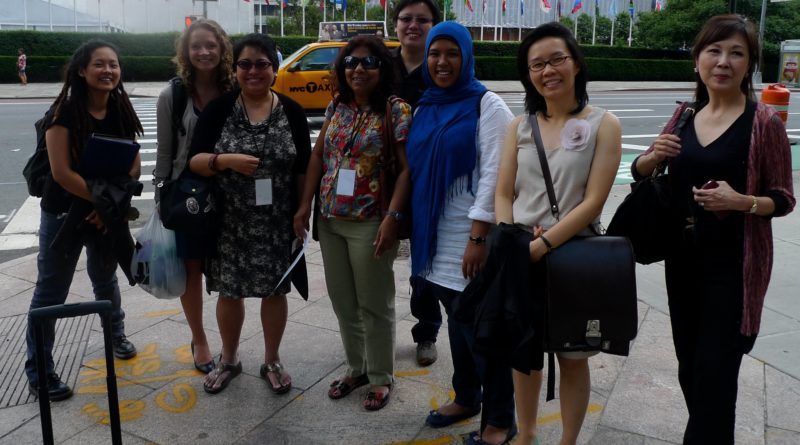 1. Gender equality experts from the CEDAW Committee asked more than 100 questions during an intense, five-hour Constructive Dialogue with Singapore’s State delegation at the 49th CEDAW session on 22 July 2011, in the New York headquarters of the United Nations.

2. The Convention on the Elimination of All Forms of Discrimination against Women (CEDAW) is an international human rights treaty which Singapore signed in 1995. State signatories are obliged by a comprehensive bill of rights to guarantee women’s equality and freedom from discrimination in public and private life, as well as to report periodically on their progress.

3. Singapore’s civil society was represented at the session by four organisations that had submitted shadow reports and made representations to the Committee:

Notably, this is the first time that HOME and Sayoni participated.

4. Minister of State for Community, Youth and Sports, Madam Halimah Yacob, delivered a comprehensive statement on Singapore’s progress with gender equality and the State’s decision to partially withdraw reservations to Articles 2 and 16 of the Convention. She affirmed the State’s “full commitment to the promotion and protection of human rights, in particular the rights of women”.

5. Civil society organisation (CSO) representatives are pleased that the CEDAW Committee recognised critical impediments to gender equality in Singapore and raised their concerns with the State in a Constructive Dialogue, as well as in the Concluding Observations. While some organisations are disappointed with the State’s stock responses, all believe that the State is committed to fulfilling its treaty obligations and welcome future progress.

AWARE is encouraged the State has removed blanket reservations to Article 16 and Article 2 of the convention. We also commend the State’s repeated declaration of its full commitment to gender equality and its commitment to working towards the ratification of the UN Protocol on Trafficking.

But, we remain concerned about the State’s reticence on its obligations to institutionalise CEDAW across the board including in Parliament, the judiciary and law enforcement agencies, schools and the media. AWARE is also troubled that the State’s avowed approach to meritocracy and Equal Opportunity is unconcerned with the other core CEDAW principles for Substantive Equality which are: Equal Access and Equal Outcomes.

Several members of the CEDAW Committee have also asked for national mechanisms such as a Human Rights Institution and anti-discrimination law. AWARE is deeply concerned with the systemic discrimination of marginalised women in Singapore, namely: the sexual minority, the “foreign wife” and “foreign domestic workers” and women with disabilities, in the absence of a clear anti-discrimination mechanism. In this respect, we urge all relevant Ministries, especially the Ministry for Community Youth and Sports (MCYS), to include in public policy consultations all Civil Society actors, in addition to the three apex bodies. We also urge the State to make the Office of Women’s Development (OWD) independent of the Family Division at the MCYS and to set aside a dedicated budget for mainstreaming CEDAW through committed public education, improved data collection and temporary special measures.

HOME welcomes the Concluding Observations of the CEDAW Committee supporting the raised concern that migrant women domestic workers in Singapore do not enjoy equality before the law and in practice. They are excluded from the Employment Act and are not entitled to a mandatory rest day like other workers and are subject to mandatory deportation on grounds of pregnancy and HIV infection. HOME urges the State to be fully committed to the implementation of international labour standards for migrant women domestic workers under the ILO Convention Decent Work for Domestic Workers.

In view of the increasing numbers of victims of trafficking in the region, HOME is hopeful that the State will not further delay the ratification of the Palermo Protocol and would enact an Anti-Human Trafficking law to provide comprehensive Victim Protection Assistance and an Inter- Agency monitoring and evaluation body which provides for multi-sectoral representation including CSO partners.

Sayoni was heartened that the Committee’s experts recognised the wide range of direct and indirect discrimination that women face as sexual minorities (e.g. lesbian, transgender). About these marginalised groups of women, the Committee raised concerns about:

The State’s response since 2007 that there is no deliberate discrimination and its evasion of specific questions reflects weak knowledge and understanding of how discrimination is different and worse for sexual minority women. However, this creates a valuable opportunity for new perspectives. To this end, Sayoni invites groundbreaking dialogue with the State, the media and the public.

SCWO was pleased to note that progress has been made on many fronts, including the elevation of the Women’s Desk to the Office for Women’s Development, which we see as being better resourced and focused to advance our nation’s progress to Equal Voice, Equal Space and Equal Worth for women.

In our reporting to the CEDAW Committee, SCWO highlighted the areas where we would like to see greater progress.

With our generally ageing population and the longer life-expectancy of women, Singapore is facing the feminisation of ageing. We must therefore put in place measures to improve the protection of older women from social and economic marginalization, including addressing gender disparity in retirement incomes by looking at the cause and effect of existing income disparity in the workforce.

90% of women over 60 years of age have less than Secondary 4 education, and 80% will be widowed by the age of 80. Improved healthcare for women at different stages of life, health infrastructure for women with disability, and skills upgrading and training with targeted interventions for disadvantaged groups, will enable these women to keep pace with the information age and maintain their health, independence and functionality. Education for reintegration of women who have left the workforce must also be a priority.

SCWO recommended the acceleration of the promotion of female parliamentarians to ministerial appointments and to enable more gender diversity in high level positions in government, boards of public organisations and public companies.