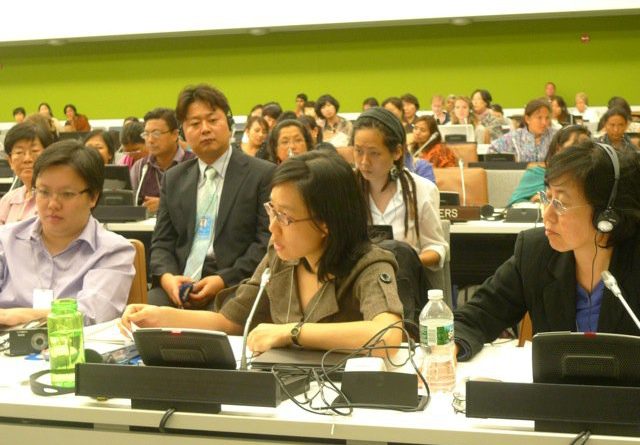 Editor’s note: This is the oral statement by Sayoni, delivered by Kelly, before the UN last week. Our team has completed their duties at CEDAW, and we await their return from New York so that we can congratulate them on a job well done.

I am from Sayoni and represent women in Singapore on sexual orientation and gender identity. The State has said that there is no discrimination against homosexuals in Singapore. Our research and experience show otherwise. The most pressing issues are:

Legislation inherited from the British criminalises sexual intercourse between men. This criminalisation sets the stage and cascades. It condones discrimination against lesbian, bisexual and transgender women, and it prevents equality of access, opportunities and outcomes for us in public policy.

Next, censorship is applied through media codes and policies to pathologise consensual, adult relations between women such that only negative stereotypes are permitted for broadcast. Their constant, cumulative effect informs behaviour and shapes public opinion, contributing to discrimination against sexual minority women.

Sexual minority women are excluded from employee spousal and maternity benefits which are based on marital status. We have no legal recourse for discrimination at the workplace and face risks of additional repercussions if we use existing grievance mechanisms.

Children in school are subject to bullying and ostracism by their peers because of their perceived sexual orientation or expressed gender identity. There are no policies and regulations to protect them explicitly from such discrimination or abuse.

Furthermore, the State mandated that all sex education providers exclude crucial, potentially life-saving information on sexuality for sexual minority women. This contributes to a higher prevalence and risk of depression, suicide, substance misuse and deliberate self-harm among them.

Women in same-sex partnerships are excluded from access to spousal medical rights, financing and family planning.

These are but some of the prevalent, systemic discrimination detailed in our report.

Consequently, sexual minority women experience not only discrimination as women but as sexual minorities. Our gender identity and sexual orientation intersect with multiple identities such as socio-economic status, ethnicity, age, religion and disability, to create unique forms of discrimination.