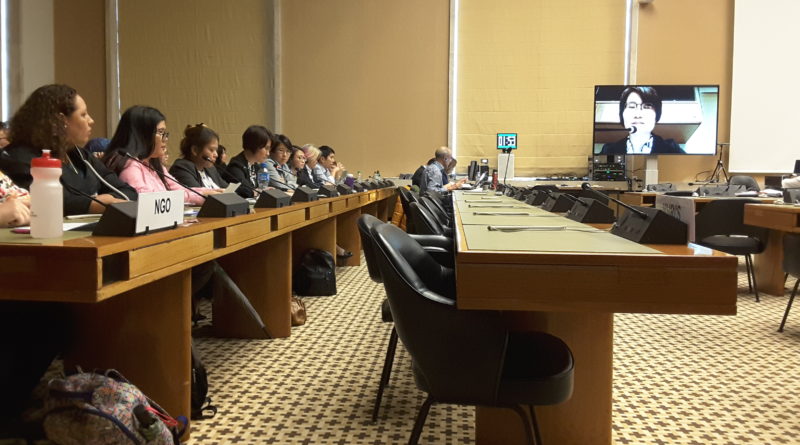 Prior to the actual CEDAW session, we attended a training session by IWRAW on what to expect for today’s Informal Public Meeting or oral statement session. Each country is given only 10 minutes to present, and all the non-governmental organisations (NGOs) from that country have to share this time to raise their issues.

Sayoni had a mere two minutes to make our point on violence faced by lesbian, bisexual, transgender and other queer (LBTQ) women in Singapore, as a result of discriminatory state policies.

At the oral statement session today, it was nice to see all the practice during the training coming in handy. We brought up the issues of how censorship by the state reinforces negative LBTQ stereotypes; that sex education in schools has no mention of LBTQ-specific sexuality information; and state-sanctioned violence due to criminalisation by Section 377A of the Penal Code. All these contribute to violence against LBTQ women.

After the oral statements by NGOs from the four countries – Burkina Faso, Singapore, Paraguay and Nauru – there were questions raised by the CEDAW Committee. One asked whether there have been court cases based on Section 377A against women and the result of such cases, as opposed to the constitutional challenges involving sex between men. While there is no specific law against LBTQ women, Section 377A has cascading and pervasive effects on discriminatory state policies.

There will be a lunch briefing tomorrow, where we hope to bring greater awareness to the systemic violence LBTQ women face.